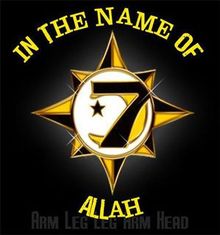 2) B-BE or BORN-Be means to exist in the physical form. Born means to be complete. Just as it takes nine months to bring a child (understanding) or (star) into this world, it takes nine stages to manifest or make anything complete within itself. Born also means to speak wisely for wiseness is based on facts.

3) C-TO CEE-is to understand. At one time we couldn’t truly see the trick that was planted in our path because we had a mattress thrown over our eyes. But we’ve been born trice and know that we are Allah, the supreme eye that can see all. To see is to understand with the third eye which is the mind. Our two physical eyes are but doorways to the third eye which is the all seeing eye.

4) D-DIVINE-is a characteristic, or rather, the nature of the black man who is Allah, meaning Godly. One must refined in order to be divine.

5) E-EQUALITY-means to be equal in everything, which is knowledge, wisdom and understanding; meaning 1 plus 2 plus 3 equals equality. Equality is the power of the black man’s knowledge which in itself is the knowledge of refinement, it’s also the black woman who has been elevated to her fullest capability which is (6) or equality, due to the fact that she has only six ounces of original brain…making six her limitation.

6) F-FATHER-is one who is qualified to give life both mentally as well as physically. Father means to FAT-HER with true knowledge of herself so that she can show her equality by rearing the children properly.

7) G-GOD-is the sole controller of the universe, the supreme being or black man of Asia that understands his culture (Islam).

8) H-HE and HER-have the powers to build or destroy depending on his or her level of awareness meaning supreme intelligence. He is the blackman, known as God the supreme being. Her is the black woman who is the black queen who is secondary

10) J-JUST-I-SEE-EQUALITY, also JUSTICE-meaning to freeze at 32 degrees. Ones reward or penalty depending upon his/her ways and actions after being given the knowledge on a particular cipher (person, place or thing). All those who can’t deal with the mathematics will be just-ice at 32 degrees below zero because they fail to understand the wisdom of God which deals just and true with all the human families on the planet earth.

11) K-KING–KINGDOM-is he who shows and proves that everything is peace in his kingdom by building with self and others. God is the King and the earth is his kingdom. King is the black man who is indeed ruler of his family. Kingdom is the home of the black king and queen.

12) L-LOVE, HELL OR RIGHT.-Love is understanding and a misunderstanding is what brought forth Hell. But this is all going back to the degree of supreme understanding because this is the only truth that is right and exact at all times. Right is exact because if you love Islam you will go through Hell (trials and tribulations) and in the end you will come out right. Love is perfection (knowledge before wisdom). Hell is imperfection (wisdom before knowledge). You can either love Allah, or leave him the hell alone, and it will be all right, for Allah is all understanding.

13) M-MASTER-is one who knows and understands all things in his circumference (atmosphere), the master’s culture is Islam for Allah is the master of the known and unknown. Master means to be complete with 120 lessons of pure understanding.

14) N-NOW, NATION,or END-Now is the time to knowledge the culture and bring forth righteousness and put an End to all devilishment in existence. Now is the time for the black man to end his weak ways so that the black nation can rise and knowledge all of it s creation and put them all in order again or surely it will be our end now.

15) 0-CIPHER-is a person, place or thing which is complete within itself, for a cipher is a complete circle consisting of 360 degrees. The black woman is also a cipher because cipher means C-I-POWER-HER and surely God powers her by mastering her with his mind. Her-Power-You-Must-See in order to master her equality.

16) P-POWER -is the truth and truth is the light that sets your mental power free to see that the black man is indeed God.

17) Q-QUEEN-is a refined black woman who knowledges God in order to build along side of God. A queen is the counterpart of the king, so she must always knowledge the king to uphold her place by God. The most purified particle of Allah, better known as the true rich black soil. The mother of civilization who has the scales of justice within her, but is still blind to her powers, which is being queen of the universe and earth below, but has the power to control both from the energy that Allah gave her.

18) R-RULE or RULER-Rule is to control righteously. God is the only ruler there is by knowledging his building powers and making it born to all the planets of the universe, so that they can go according to it and bear witness to who the true ruler is, the black man, Allah.

19) S-SELF or SAVIOR-The black man’s knowledge is what makes him the savior of himself, by borning himself or completing himself. The only one that can save you is yourself.

20) T-TRUTH or SQUARE-Truth is the light that leads one from the darkness of ignorance. A Square has four equal sides, each corner has 90 degrees (90 x 4 equals 360). 360 degrees is a cipher (that which is complete) both mentally as well as physically, showing and proving that the truth is the way to square off all unrighteousness.

21) U-UNIVERSE or YOU-When you wisdom (speak) your knowledge (intelligence) you bring forth understanding which is the completion of your universe. The universe is everything, sun-black man, moon-black woman, star-black child. They are celestial (Heavenly) bodies. When you (U)-N-I-VERSE we bring about a more glorious and higher elevation of understanding.

22) V-VICTORY-is to show one’s culture (Islam) by teaching civilization because this is the way to be victorious over the devil (white man) in his attempt to keep our people illiterate (blind, deaf and dumb).

23) W-WISDOM-is to speak wisely. To wisdom is to make our knowledge known. Wisdom is water, true substance of earthly life. Wisdom is also the black woman or beautiful mother of earth.

24) X-UNKNOWN-lf one cannot speak (wisdom) about his/her culture they are unknown to their true self, and therefore they cannot deal with equality with others. God’s duty is to make the unknown known to the blind, deaf and dumb.

25) Y-WHY-is asked by the 85 percent because they don’t know. Why is asked by a wise man because he wants to know. God is the only one qualified to answer it

26) Z-ZIG ZAG ZIG-means that the black man, black woman and black child must build together to destroy all unrighteousness. ZIG ZAG ZIG is also knowledge, wisdom and understanding.

1. Explain briefly in your own words the meaning of “Supreme Alphabets”.

2. What is the meaning of language of God?

3. What makes up the Supreme Alphabets?

4. What does wisdom one’s knowledge mean?

5. What does the language God use indicate?

6. What does A-Z knowledge born mean to you?

7. Write a brief autobiography of your God/Earth self.